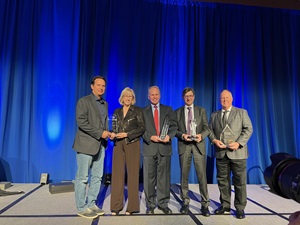 LAS VEGAS – October 31, 2022 – The Aftermarket Warehouse Distributors Association (AWDA), a community of the Auto Care Association, recognized the recipients of its annual AWDA Industry Awards on Oct. 30 during the 2022 AWDA General Session which took place in Las Vegas, Nev. The annual AWDA Industry Awards honor individuals and companies who have shown an exceptional ability to educate, innovate, manage and lead. Over the years, the list of AWDA award recipients has evolved into a who’s-who of aftermarket luminaries.

Established in 1983, the Pursuit of Excellence Award is presented exclusively to an AWDA member for special achievement and for the setting of high standards as an example for others to follow, in business and in volunteer or advocacy efforts.

When Todd Leimenstoll took his first job in the industry over 40 years ago, in hopes of getting a better deal on parts, he ended up finding a passion that led to a lifelong career in the aftermarket. Since joining Auto-Wares in 1982, Leimenstoll has held multiple positions across the organization and in 2012 was named president and CEO of Auto-Wares Group of Companies.

Throughout his career, Leimenstoll has supported and promoted dozens of educational opportunities for thousands of aftermarket personnel. His company’s crowning training achievement, the annual Tech Expo, caters to thousands of industry folks, but Leimenstoll’s commitment to education extends far beyond the popular expo event. Within Auto-Wares, Leimenstoll has fostered a culture of learning and growth. He is also active in the greater industry, including having hosted with Auto-Wares multiple YANG Meet-Up events to foster aftermarket development and growth.

“Todd brings an incredible amount of energy into any project he undertakes,” said John R. Washbish, president and CEO, Aftermarket Auto Parts Alliance. “At the same time, he is focused on always doing better; always improving the experience and always ‘coaching, guiding and advising’ his fellow employees and customers to accelerate their performance. He is passionate in his aftermarket ‘Pursuit of Excellence!’”

Each year, AWDA bestows this prestigious award, formerly known as the “Leader of the Year,” on an aftermarket professional who has contributed to the industry in a unique and significant way. The award is named in honor of former AWDA President, Jack Creamer.

During his more than 20 years at the Auto Care Association, Larry Northup was a dedicated champion for the aftermarket. In his latest role as the AWDA executive director, Northup worked to encourage and support the re-establishment of the AWDA community’s decades-long tradition of leadership within the industry.

Since 2004, Northup’s efforts for the AWDA community included the integration of AWDA members into all aspects of the Auto Care Association’s leadership, including the board of directors; committees; task forces; the association’s political action committee; special projects like career promotion, Right to Repair, the University of the Aftermarket Foundation; and many other aftermarket industry advocacy efforts. He was also key to bringing the annual AWDA conference into the fold as part of Industry Week every year in Las Vegas. In addition, Larry’s advocacy during the pandemic helped establish the auto care industry as an essential service throughout the COVID-19 pandemic.

“I had the good fortune of working with Larry for many years,” said 2021 recipient Roger McCollum of N.A. Williams. “I knew of few people more dedicated to this industry, especially when it came to his involvement with warehouse distributors and AWDA. Larry worked with a passion that was contagious and made those around him better for knowing him and working with him. He deserves all the best in retirement – and this industry will not be the same without him.”

AWDA’s Lifetime Achievement Award recognizes individuals who have, over the course of many years, distinguished themselves through their unselfish commitment to, and high level of performance within, the motor vehicle aftermarket industry. The award is named in honor of former AWDA President, Martin Fromm.

Aaron Lowe was with the Auto Care Association for over 40 years overseeing the association’s federal and state legislative and regulatory efforts, focusing on a wide range of environmental, vehicle safety, workplace health and safety and international trade issues.

Lowe masterminded the Auto Care Association’s successful effort in 2012 to obtain enactment of the Motor Vehicle Right to Repair Act in the Commonwealth of Massachusetts. Right to Repair ensured that independent service entities have effective and affordable access to the information, tools and software to work on the highly sophisticated computer-controlled vehicle systems on the road today. He also was part of the team that successfully negotiated a 2013 national agreement on right to repair that is modeled after the Massachusetts law.

Lowe’s commitment to the industry went well beyond simply government affairs, as evidenced by his receiving the Northwood University Automotive Aftermarket Management Education Award in 2003. He was also on the board of directors and steering committee for several aftermarket coalitions aimed at ensuring the economic future of the auto care industry.

“Aaron's lifetime of work on behalf of the industry has no peer,” said Bill Hanvey, president and CEO, Auto Care Association. “He has defended our industry for 40 years and has secured the consumer's right to choose where they have their vehicle repaired amongst other significant contributions. We as an industry are indebted to Aaron and there is no more deserving recipient of this award than he.”

AWDA’s Art Fisher Award for Excellence in Education is presented annually to an aftermarket company or individual that demonstrates outstanding commitment to education and training, either within their organization or throughout the industry. Given in memory of former AWDA Chairman Art Fisher, the award grants scholarships in the name of the award winner to two students enrolled in the automotive aftermarket management program at Northwood University.

Established in 1972 as a non-profit organization, ASE is a driving force in the transportation industry. As an independent third party, ASE upholds and promotes high standards of service and repair through the assessment, certification, and credentialing of current and future industry professionals; and the prestigious ASE Blue Seal logo identifies professionals who possess the essential knowledge and skills to perform with excellence. Today, there are approximately 220,000 ASE Certified professionals at work in dealerships, independent shops, collision repair shops, auto parts stores, fleets, schools, and colleges throughout the country.

When the ASE seal is displayed outside of a service station, customers know their vehicle is in good hands and will be repaired with the best craftsmanship possible. And that seal of approval is only earned by completing training and passing the tests required to earn it – and these are not just simple tests. Only 2 out of 3 pass the test on their first attempt, and in the interest of continuing education, they must retest every 5 years, as well as have at least 2 years on-the-job experience.

“Our entire group endorses ASE, as their name is synonymous with training and education,” said Bo Fisher, Fisher Auto Parts. “For decades, in every technician flyer we produce, we have shown pictures of two different employees who recently passed their ASE certification test. Given the outstanding efforts of the organization, we are proud to see their achievement of this honor and wish them all the best over their next 50 years.”

To learn more about the AWDA Industry Awards and to view previous winners, visit autocare.org/awda.